The first Sikh to be Initiated in Athol Lodge since the Lodge was first Formed in 1811.

A proud moment for Athol Lodge No.74 and the candidate, Baljeet Singh Gill, and when he was initiated into the lodge on Wednesday 3rd November 2021, two hundred and ten years after the lodge was first formed. 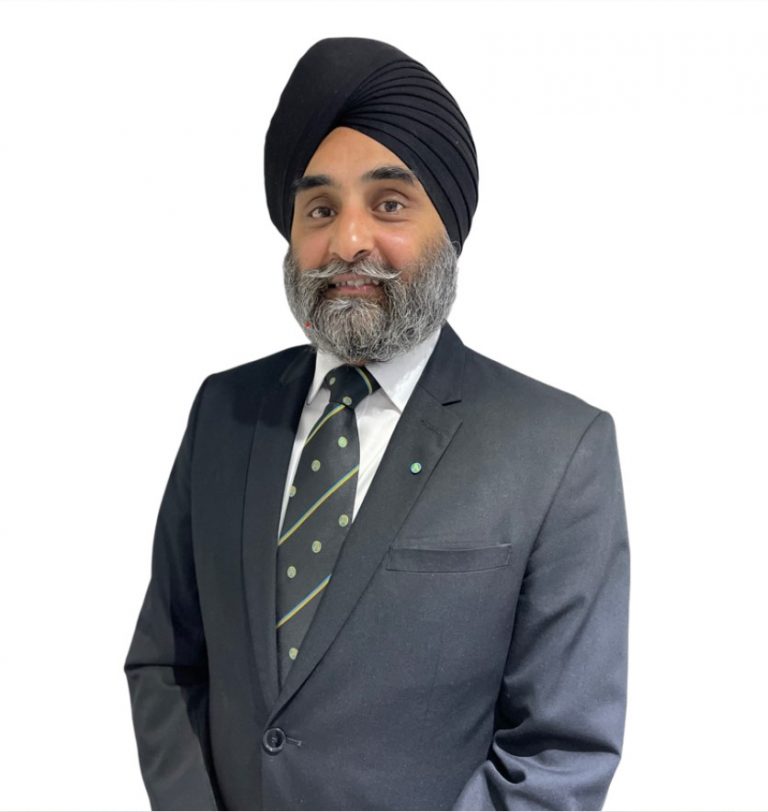 The Worshipful Master, W.Bro. Anthony Wright and his team delivered a flawless ceremony and welcomed Mr Gill into, “One of the oldest and most prestigious lodges in freemasonry in the United Kingdom”. After the ceremony, at the Festive Board, Mr. Gill said, “I was very humbled and proud to be welcomed into such a historic lodge and I will never forget the love and
camaraderie you have shown me. It was an evening I will never forget”.

Baljeet, who comes from a long line of proud Sikhs, and is known to all his friends and colleagues as “Bobby.”

He is 49 Years old, an Engineer who was born in Leamington Spa in Warwickshire, but now lives in Great Barr, Birmingham, with his wife, Kam. They have three grown-up children, all of whom have completed their university studies, and making their way in the world.

In his spare time, he is an active golfer and polo player.

Mr. Gill is well known in the UK Sikh Community for his contribution to Sikh military history. Amongst his many contributions to Sikh charities, he is also an advisor to the National Sikh War Memorial Trust which commemorates the over 123,000 Sikh soldiers killed in the last two world wars, fighting alongside the British and other allied counterparts.

The trust are at an advanced stage of erecting a statue of a Sikh soldier outside Admiralty Arch on the Pall Mall, London.

W.Bro. John Harris from Athol Lodge and also the Warwickshire Provincial Grand Almoner is raising funds with his Family for ‘Ovacome’ because we want to help women fighting Ovarian Cancer.

John, and his Family members, Beckie, Ash and Jacob are going to climb Mount Snowdon (Yr Wyddfa) on Saturday 18th September 2021 to raise funds for Ovacome, and John says “If we face our own challenge with just even half of Pat’s determination, we will smash it”.
The team have already raised over £5000 for the charity and hope to raise even more with their epic mountain climb, so please do visit their just giving page and donate.

Ovacome provide support & information to anyone affected by ovarian cancer
Charity Registration No. 1159682 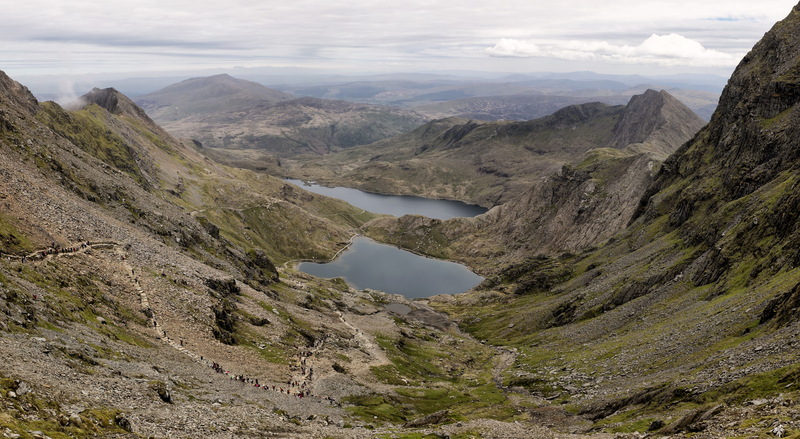 The Story So Far
“As most of you know in July 2017 our world was turned upside down when our beloved Wife, Mom, Mother in Law and Nanny, Pat, was diagnosed with Ovarian Cancer. She is a true fighter and continues to face every challenge with determination”.

A Message from the lady herself, Pat Harris:

‘Ovacome’ campaigns to help people recognise the signs and symptoms of Ovarian Cancer, offering help and support for the many women who have been diagnosed with this dreadful disease. I have been living with Ovarian Cancer since 2017, I now take a maintenance tablet that’s helping me to live a full and happy life. My way of dealing with my illness is to have a strong and positive mind with many goals ahead and looking forward to tomorrow.

Please Donate to The Harris Family 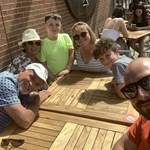 Severn Street Masonic Hall is a Grade 2 Listed historic building situated
in the heart of Birmingham City centre city centre and have been described
as a “Hidden Gem of architectural and cultural significance”.

Severn Street Masonic Hall is a Grade II listed building that is a very important part of the architectural heritage of the city of Birmingham. Severn Street was originally in an area called the Froggery, a poorly drained, marshy area that had been part of Birmingham from Medieval times. In the 18th and 19th century it was a poor, slum area populated by thieves, crooks and prostitutes living in tenement blocks. The peaky blinders were also based nearby in Small Heath in the late 19th century.

On 29th November 1858, Athol Lodge bought the Severn Street Synagogue and opened it as its Masonic Hall and permanent meeting place. The Dining Room and ante-rooms were added by Henry Nadan between 1871 and 1874 and built by a local builder called Moffat.

The Masons were careful to preserve the historical tradition of the building by adding ‘Maginei David’, Hebrew for Stars of David, affixed to the top of each of the pillars. There are five-sided Masonic stars on the two

ornate fireplaces (five-sided to refer to the five points of fellowship), as well as magnificent gilt overmantle mirrors. These allow the whole interior to refer to the two original functions – Synagogue and Masonic Hall. After every meeting Masons use this Dining Room to hold a meal or ‘festive board’. Freemasonry is not a secret society but it is a society with secrets.

Visitors will have a guided tour of the buildings by members of Athol Masonic Lodge No. 74 which is one of the oldest masonic lodges in the country.

Access
There is limited wheelchair access on site but must be notified beforehand in order that we van make the necessary arrangements.

COVID-19 Considerations
In view of the precarious situation with the Covid pandemic, particularly in the Birmingham area, it is an absolute condition of entry that all visitors, including children, must wear face masks when entering the building and during the tours of the buildings.

Additional Information
Max 6 people per tour/session. 30 minutes It is important that visitors visit our website beforehand to give them an idea of who we are, what we do. www.athol.org.uk We all answer any questions about freemasonry during and at the end of your tour The guides are volunteers who are members of Athol Masonic Lodge. Contact for the day: L G Leek. md@sislondon.com
http.//www.athol.org.uk

Directions
Severn Street Masonic Hall is adjacent to the famous ”The Mailbox” which is a city centre retail, restaurant and hotel complex in the city centre of Birmingham, approximately 400 metres from Birmingham New Street Station. Parking is available under “The Mailbox ” and the Mailbox itself is available for eating, drinking and relaxing throughout the day

Starting in June 2021 and ending at the end of September the Universities Scheme national and regional committees organised a challenge walk involving all those provinces within England.

Athol Lodge  No 74 and APGM Nigel Hawkins from Warwickshire PGL received the Challenge Cup from the Coventry Team in fine style on Wednesday 11 August at Brindley Place Birmingham, and the following day, ten members of Athol  Lodge, including two backup drivers Andy Atton and Bob Priest assembled at Brindley  Place to commence the 18-mile walk to Wolverhampton.

Athol’s WM, Tony Wright with his wife Claire and Athol Secretary, Garry Askey with his wife Jackie led their team on a long walk along with a series of canal towpaths to Wolverhampton where they were met along the way by  Provincial Grand Officers from Staffordshire and Concordia Lodge including the redoubtable ‘Paddy Dunne’ who organised a superb buffet at the masonic hall.

Over 20 members, partners, and guests took part in a light-hearted Burns Night, which involved toasts to Robbie Burns and a Scottish themed quiz, and lots of fun which is just another example of our Worshipful Master and his wife Claire keeping all our spirits up with yet another enjoyable social event.

Athol Lodge members and their partners took part in the first of a number of online weekly fitness training sessions at 9am on Tuesday 2 February 2021, and will continue every Tuesday morning at 9am.

The training is free of charge and led by Bro. Martin Carver, a professional fitness instructor and a former Army Senior NCO from our friends at White Ensign Lodge, the sessions last 40 minutes, suitable for all ages and fitness levels.

All brethren are welcome, and for further information please contact our Secretary, W.Bro. Gary Askey. 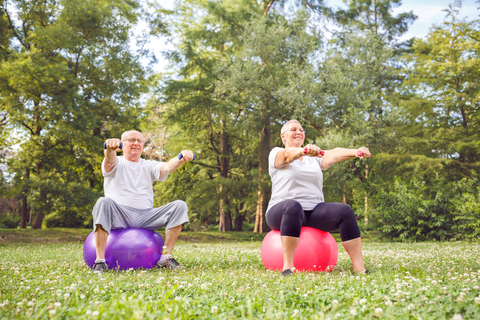 In view of the current crisis with the Covid 19 pandemic, Athol Lodge, for the first time ever are hosting an Virtual Installation Festive Board for our members and masonic guests.

W.Bro. Anthony Wright this year’s Worshipful Master will continue in post during 2021 and will chair the meeting.

Saint Patricks Lodge No.295, the original founders of Athol Lodge in 1811 when they arrived in Birmingham as the 4/7 Dragoon Guards will be represented by the modern-day members of this lodge, the oldest travelling lodge in the world who are linked with the current Royal Dragoon Guards based in Warminster, Wiltshire.

Our friends from our twinned lodge, the General John J Pershing Lodge in Maastricht will also be attending together with our friends from White Ensign Lodge from Worcestershire, and others from Scotland and nearby provinces.

“Over 50 freemasons from as far afield as Scotland, Ireland, Canada and Holland came together to celebrate the virtual installation festive board of Athol Lodge including three military lodges from Saint Patricks Lodge.No 295, the founders of Athol Lodge, White Ensign Lodge No.9169 and General John J Pershing Lodge from Maastricht, Holland. 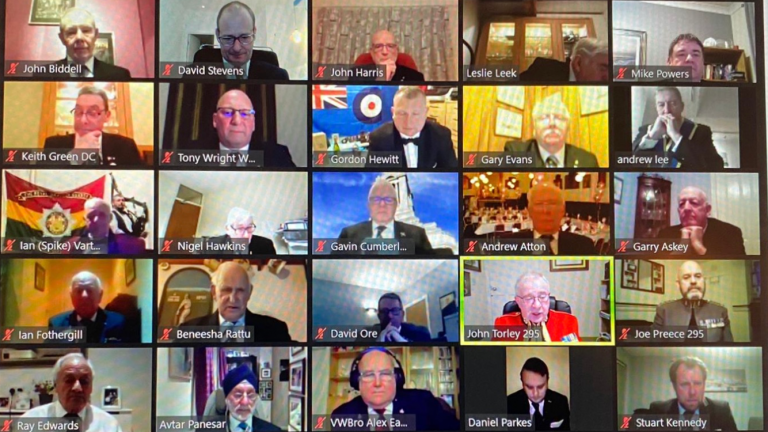 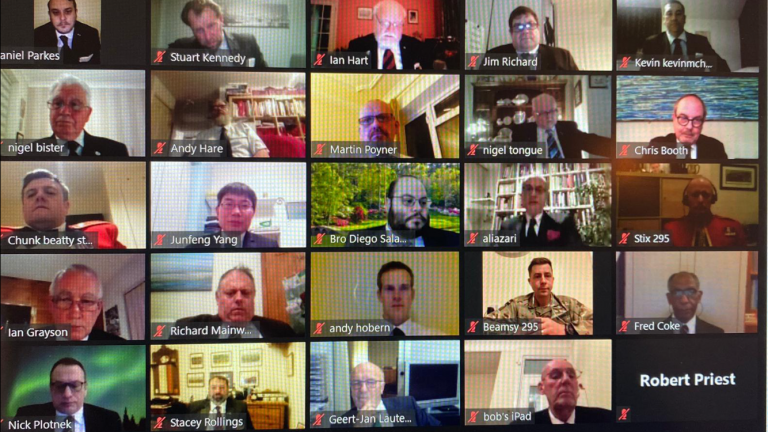 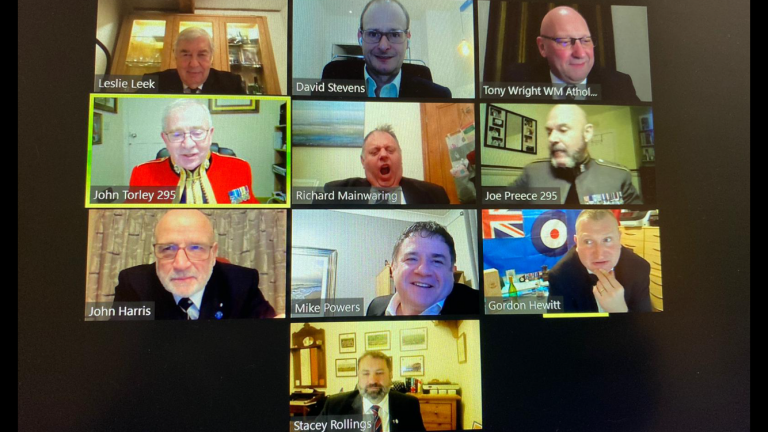 Athol Lodge have a virtual meeting every Wednesday evening which is a general chat and making sure everyone is Ok.

Here’s the screenshot of the participants in last nights Athol Lodge Quiz Night – 22nd May 2020.
We had a great time, loads of fun and banter in between doing quiz questions, scavenger hunt and identifying objects from very close up photos. We also invoked points deductions for “lockdown haircuts”, anybody with a beard and invoked virtual demotions/promotions of officers within the lodge if their quiz questions were too hard!! We all picked up on the point of keeping in touch, especially with those having already been in isolation/shielding now for many weeks and that such evenings go some way to giving people social inclusion, hope and relief!
Therefore even though we have a break in our Masonic meetings we have decided to keep up these evening events every other Friday and all are free to join and can contact myself at  secretary@athol.org.uk

We held a smashing inaugural Athol 74 Quiz night on Saturday 9th May.

Our WM WBro Tony Wright (top centre of picture below) arranged it on Zoom.


The eventual winners being:-


My wife and I (top left).
Testing questions ranged from:-
Lyrics to Identify the song, from Mrs Claire Wright.
Current Affairs from Mrs Teresa and John Biddell PM.
Geography from Mrs Leslie and Mike Powers JD.
General Knowledge from Mrs Bernice Field
Random Questions from Mrs Jacqueline Askey and myself.

We will be holding another Zoom social event In two weeks time aside from our weekly Wednesday call with the Brethren on Masonic matters.

A good number of us and visitors joined in the call from our Worshipful Master to attend Athol Lodges first Virtual Informal Night tonight!

We enjoyed a very enjoyable two hours together which included:-

Thanks to all who contributed to a night never to be forgotten!

Below is a screen shot of the assembly 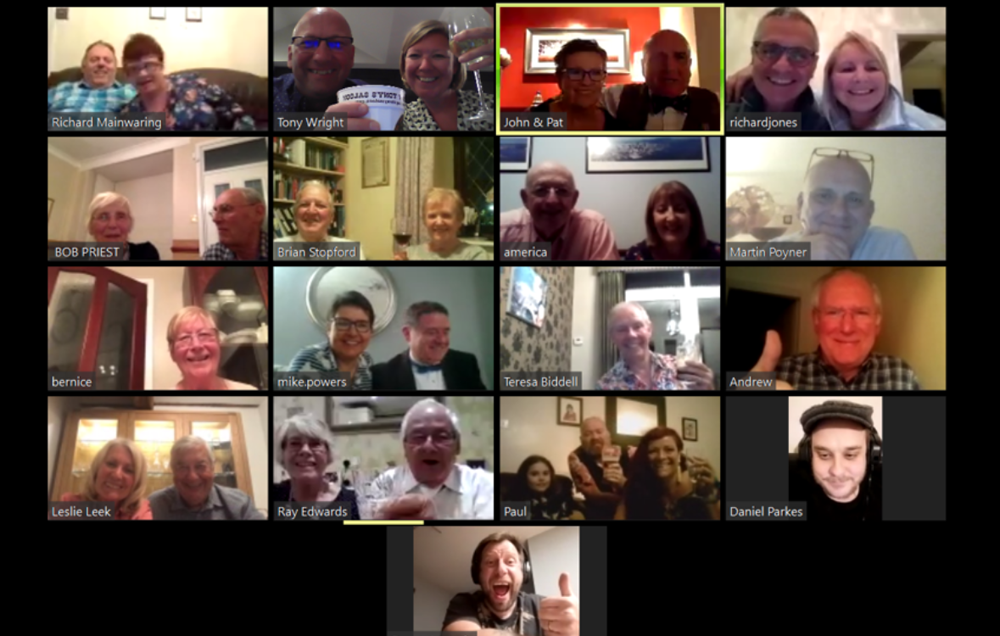 Please note this is not an exhaustive list of activities and may be subject to change.

Athol.org.uk Policies - https://athol.org.uk/the-masons-and-freemasonry-in-birmingham/
Necessary Always Enabled
Necessary cookies are absolutely essential for the website to function properly. This category only includes cookies that ensures basic functionalities and security features of the website. These cookies do not store any personal information.
Non-necessary
Any cookies that may not be particularly necessary for the website to function and is used specifically to collect user personal data via analytics, ads, other embedded contents are termed as non-necessary cookies. It is mandatory to procure user consent prior to running these cookies on your website.
SAVE & ACCEPT